Ain’t Too Proud: Tempting the Jukebox Musical Towards Something Great

"Ain't Too Proud" uses the timeless music of The Temptations to tell the complex, compelling story of the group.

“Ain’t Too Proud” follows the story of The Temptations: their humble origins, their triumphs across genres and their interpersonal trials and tribulations. It’s a jukebox musical but not the kind we are used to.

A jukebox musical builds a story around existing music, usually all by the same artist. They cram hit song after hit song, sacrificing more important elements like character development and plot progression. This gives a reputation for feeling disingenuous and cheesy.

In this case, the jukebox style felt honest and innovative in “Ain’t Too Proud.” The beloved songs that all of us at the Overture Center for The Arts knew and loved had layers of subtext connected to the story and members of The Temptations.

The timeless love ballad “My Girl” acted as a benchmark in the timeline and turning points in character development.  Specifically, it represented a golden era. The Temptations had just brought on founder Otis Williams’s childhood friend David Ruffin. Ruffin’s rich, powerful voice, brought to life on the stage by Elijah Ahmed Lewis, inspired iconic songs and led the band to their first No. 1 Billboard Hit.

Lewis’s performance elevated the entire show. When he belted, the speakers crackled under his larger-than-life rock voice, and his infectious energy drew all eyes to him in every scene. Ruffin was a fascinating and intense character, and Lewis stepped into his shoes effortlessly. He would belt a high note then jump into the splits, making it look easy and natural.

Lewis kept the same vigor in the ugly side of Ruffin. The singer grew up with an abusive father and perpetuated that vicious cycle with his own wife, Motown star Tammi Terrell. In one scene narrated by Marcus Paul James as Otis Williams, tensions rise between the couple. At the conclusion of the scene, Shayla Brielle G., playing Terrell, stood in the center of the stage with her back to the audience. Viewers could see every expression across Lewis’s face as he wound up, stage-smacked her across the face and reacted to what he had done.

He was enraged and jealous, then small and insecure. We saw in Lewis’s eyes that Ruffin knew he was doing the same damage his father did but hid that shame behind his trademark ego and showmanship. Ruffin crossed the line between vivacious and volatile many times through his short life, and Lewis did an excellent job portraying every moment of that.

Iconic musicians left The Temptations as quickly as they were replaced. Ruffin was the first to be booted out, kicking off the rapidly revolving door of iconic musicians that would plague The Temptations for years to come. Act II whipped us around from one combination of five singers to another via sparkling musical numbers and James’s narration.

“I Can’t Get Next To You” marks this first transition in lead singers. Dennis Edwards, played by Harris Matthew, is a natural frontman for the group. He has the same charisma and stunning vocals as Ruffin. He led The Temptations into their later, funkier era, marked by the hit “Papa Was A Rollin’ Stone.”

But has to compete with Ruffin’s shenanigans. In this song, Ruffin leaps onstage to take back his place in the spotlight. Edwards and Lewis feed off of each other’s strong voices and electric energy as they battle over the microphone. It was tense, aggressive and endlessly entertaining.

The June 14 performance featured a few understudy and swing actors to fill in for the usual cast. Ensemble member Brett Michael Lockley stepped up to play the role of Temptation Paul Williams alongside Jalen Harris’s performance of Eddie Kendricks. The two formed a singing duo known as The Primes before joining the Temptations.

The most glaring feature of Lockley as Paul Williams was his height. Lockley is about a head shorter than Harris. This gave their rendition of “Speedo” by The Cadillacs a playful, goofy dynamic. They captured the fun of two lifelong buddies who loved to sing and dance together.

Despite his short stature, Lockley has an immense presence onstage. His character Paul Williams was the choreographer of The Temptations, and Lockley had the sharpest moves and best rhythm of the group.

His whole performance, acting, vocals and dance, of “For Once In My Life” towards the three-quarter mark of the show was truthful, vulnerable and emotionally rich. It begins with Paul asking Otis Williams to rejoin The Temptations; he had previously been put “on a break” to recover from illness and alcoholism.

The song begins as a plea for Paul to do what he loves to do: perform. Otis turns him down. Then Paul Williams dies by suicide. James’s narration gives the poignant prayer,  “No matter what happens when you die, I hope he’s somewhere on stage dancing.”

The light then shifts from James to Lockley; Paul Williams loved to sing and couldn’t go on in life without music. The woman in front of me dabbed her eyes with tissues as Lockley finished the song with a bravado we hadn’t yet seen.

Assistant Dance Captain Chani Maisonet played Diana Ross, frontwoman of The Supremes. She was fantastic, she and the other Supremes moved in sync with precision and had such a glamorous stage presence. My only complaint is that I would’ve liked to see more from her. The Supremes, and any female characters in “Ain’t Too Proud,” have such a small role that it is difficult to evaluate their performance.

Mary Wilson is the only Supreme to have a spoken line or any kind of involvement in the story for that matter. She agrees to go on a date with Temptations member Melvin Franklin. That relationship lasts for the duration of one song. While I recognize that “Ain’t Too Proud” is about the Temptations, The Supremes were the first successful musical act out of Motown. This musical positions the quintessential trio as an obstacle on their journey to the top of the Billboard charts rather than a group just as influential and popular as The Temptations.

Tammi Terrell exists only as an object of David Ruffin’s affection and abuse. Shayla Brielle G., whose talent is just as impressive as her male co-stars, has one duet with Lewis and is never seen onstage after the aforementioned slap not even halfway through the show. Terrell’s death at age 24 is mentioned as the final straw in Ruffin’s eventual unraveling, but we never get more of Brielle G.

Otis Williams’ ex-wife Josephine is only portrayed in relation to Otis and their son, Lamont. She has multiple lines and a solo song, which is more than any other woman in the show, but that still feels inadequate.

She sings “If You Don’t Know Me By Now” to tell Otis that she is leaving after his constant absence strained their marriage. There is no mention of her or her life after this song. She briefly re-appears near the end of the show to tell Otis that their son died in a construction accident, but she quickly returns to the ether backstage.

The women in these sidelined roles gave amazing performances. Najah Hetsberger, who played Josephine, clearly has comedic chops to match her compelling belt. Swing actors have a tough, unpredictable job, and Maisonet stepped up to the stage with elegance and poise as Diana Ross. Shayla Brielle G. was instantly lovable as the sweet and sensational Tammi Terrell.

Overall, “Ain’t Too Proud” was a fantastic show. There was never a dull moment, thanks to the show’s fast pacing, emotional depth, and the dedication and talent of the cast. The final bows were a dance party with the whole ensemble in white suit jackets as everyone in The Overture Center rose to their feet for a well-deserved standing ovation. 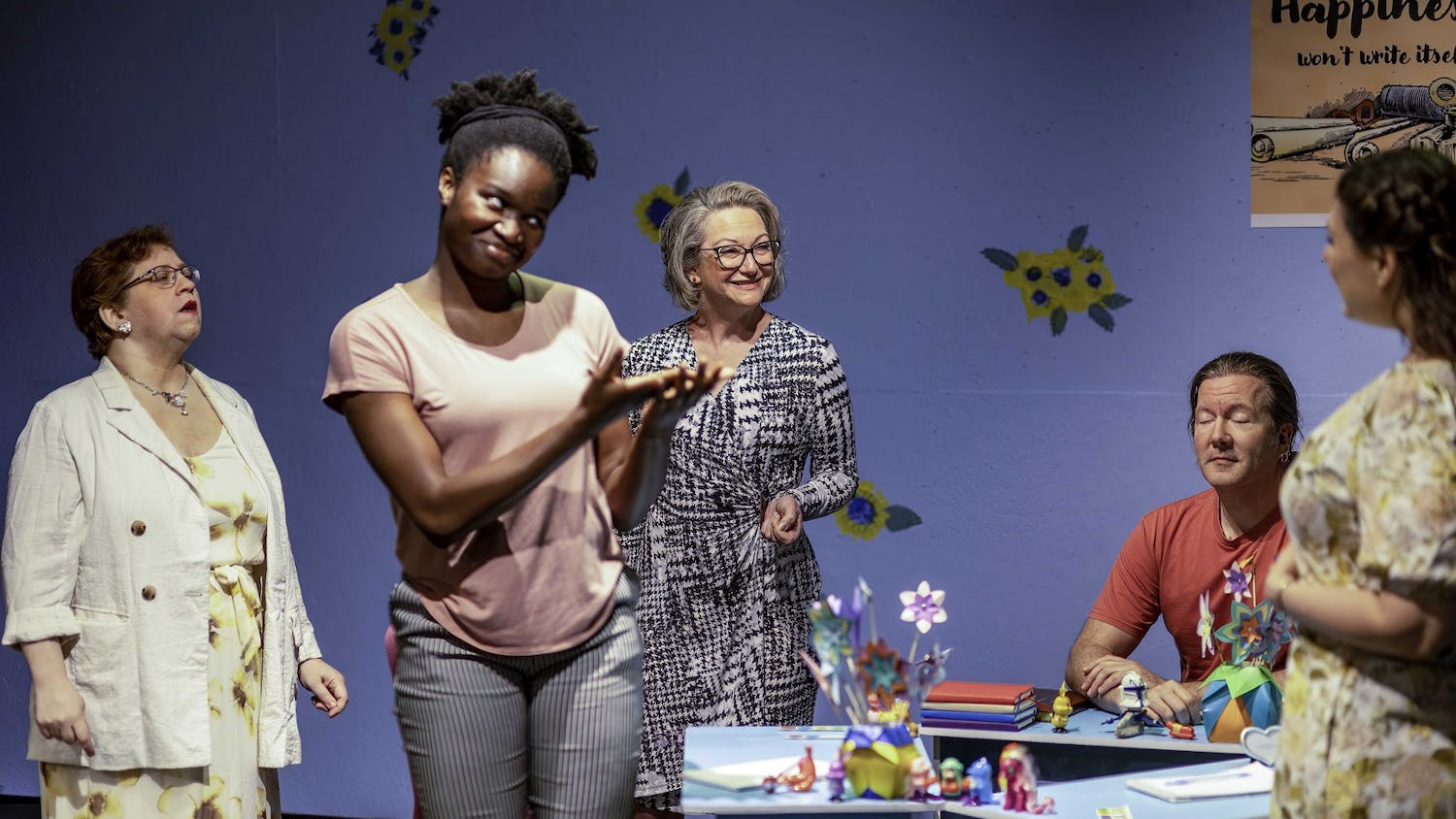 ‘Happy Landings’ is why Broom Street Theater is a special place