Alright, let’s get ahead of it now. If you have a gambling problem call 1-800-GAMBLER. Sports gambling isn’t legal in Wisconsin. We don’t condone gambling, and all that.

With that out of the way, it’s the best time of the year. Mid-March is such a glorious time. It’s rainy and gross outside, the snow has either melted or is covered in dirt and slush. It’s utterly unpleasant to be outdoors. Which is why March Madness is so important.

We’ve got dozens upon dozens of NCAA tournament college basketball games ready to go starting on Friday (the First Four doesn’t count as making the tournament, Mr. Izzo.) and Vegas has given us lines to go along with that. I’ll try to note some of my favorite bets for this weekend.

A couple quick notes from Joe:

First, I am normally cursed at gambling. There was an entire football season where my friends made sure I bet against the Badgers every game to make sure that the Badgers would win. It worked most of the time, and when it didn’t I made some cash. Thanks for the $22, Oregon!

But my college basketball betting is different. I don’t have the numbers but I feel like it's my best sport, gambling-wise. I vividly remember my first backdoor cover: No. 15 Colgate vs. No. 2 Tennessee. I took the over at 146.5. It was a 77-67 game with ten seconds to go when Colgate banked in a garbage time three to put it over. I knew from that day on that even though every time I bet football I would lose, I had something in college hoops. Basically, you should listen to me.

Second, we’re not going to touch the Badgers because we cover them and journalistic integrity blah blah blah whatever.

Thirdly, if any starters on any teams we bet on become ineligible to play due to COVID, just ignore it. Anyways, here goes:

This one hurts. I’m a huge Knick fan. I’m actually crunching to write this before I head to Madison Square Garden to catch them in person. So it really hurts me to bet against Patrick Ewing.

But the truth is, it’s the right thing to do. Colorado was frankly underseeded. Yes, they were upset by a red-hot Oregon State team in the PAC-12 tournament, but this is a complete team. They beat USC and future NBA Lottery pick Evan Mobley three times, and they’re the kind of team that doesn’t beat themselves.

The Buffs are led by McKinley Wright IV, who besides having a cool name is one of the best guards in the PAC-12 if not the nation. Wright is a senior guard from Minnesota who’s a walking double-double threat. He excels at scoring but can dish it when he needs to.

This goes beyond Wright, though. Colorado is 25th in the country in scoring defense and second in the nation in free-throw percentage. Georgetown has been hot from three lately, but a long break and a trip to Indy could cool them down pretty fast. If they can’t hit their deep shots, this game could get ugly fast.

The Buffs don’t beat themselves. The Hoyas might. That’s enough for me.

Now this is gonna be a shootout. Colgate is one of the highest scoring teams in the country and Arkansas boasts multiple players who can drop 20 points at will (looking at you, Moses Moody). This game has two top-ten scoring offenses that haven’t shown any sign of slowing down as of late. And besides, with a total line like this, you’ve gotta root for the over.

This is a classic first-round matchup. Colgate is top-5 in just about every offensive statistical category. Of course, they haven’t played anywhere near the schedule that Arkansas has, and the Razorbacks have a red-hot offense themselves. Eric Musselman’s squad is fully capable of dropping 70 points with their eyes closed, so just imagine them actually playing for something. This is a team that dropped 102 points on an SEC opponent earlier this month.

Colgate starts four guards and one forward. Arkansas has rotated their starting lineup throughout the season but are fully comfortable playing four guards at once. And when one of those guards is going to be a top-ten NBA Draft pick in a few months, you better believe they’re dropping buckets.

Arkansas has a slight size advantage and is significantly more battle-tested, so I think they win this one rather easily. But Colgate is never truly out of it, and as I learned last tournament, the backdoor cover is always an option with the Raiders.

If I had to pick one college basketball game this season to have both teams score 90 points, it would be this one. I think that’s highly unlikely, but 160 is a comfortable enough number given the offensive prowess of these two squads.

Alabama is really good, and they’re going to win this game. Herb Jones is a monster and Jahvon Quinerly is the craftiest point guard in the SEC. But don’t count out the MAAC champions to make this one close.

The Gaels have gone through a lot this season. You can say that about every college basketball team, but Iona’s had two separate weeks-long pauses. The only reason they were the No. 9 seed going into their conference tournament was because they barely played any games. They went 6-3 in their conference and 12-5 overall. For the entire season.

But don’t conflate a lack of playing time with a lack of talent. New Rochelle, N.Y.’s finest basketball team (probably) boasts some of the best talent in their conference. Senior point guard Isaiah Ross is a lock for double-digit scoring numbers every night and Nigerian forward Nelly Junior Joseph was the MAAC Newcomer of the Year. Junior Joseph shot nearly 60% from the field.

It’s impossible to talk about Iona without talking about Head Coach Rick Pitino. He’d be one of the most decorated coaches in college basketball if his accolades weren’t vacated. There are legends about how he led Louisville to the national title in 2013, but the NCAA vacated the title so there is no record of it ever happening anywhere at all ever.

The point is, Pitino is a great coach and it shows in this Iona team. They’re efficient, disciplined, and defensively sound. Will that be enough to beat one of the best teams in the SEC? Probably not. But 17 points is offensive to Slick Rick.

Plus, Iona’s official website has already booked the team’s trip into the second round. Seriously. 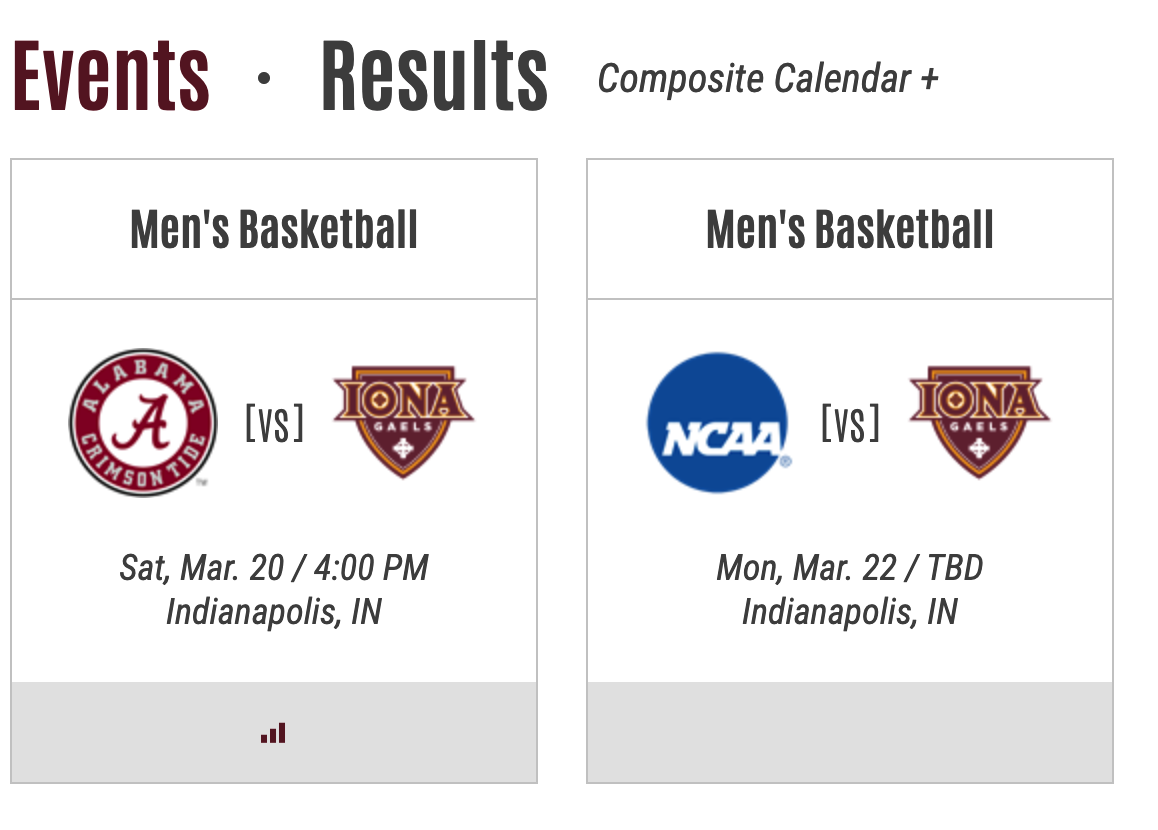 In probably the most picked 5-12 upset this year bookies are still giving Winthrop six points. But these are the same guys that had Wisconsin as favorites against Iowa and Illinois this year so we can’t be too surprised.

Villanova is a team running on pride at this point, having now lost their top two point guards in Collin Gillespie and backup Justin Moore and stumbling into March having lost three of their last four games, including a loss to Georgetown in the Big East Tournament. The burden to win will fall to the Wildcats top scorer Jeremiah Robinson-Earl (15.7 ppg) and the rest of the team, but things aren’t looking bright for ‘Nova.

Winthrop is an experienced and balanced team who likes to run the floor and strike in transition, so if Villinova’s guard play can’t handle the pressure it could spell trouble for the Wildcats.

In this household we don’t believe in the Jay Wright factor — I don’t care how nice his suits look or how slick his hair is, he’s not getting out of this one.

And by that I mean, Villanova won’t win by seven.

Illinois to win the Midwest Region (+130)

I feel like Illinois has the second easiest path to the Final Four, and no disrespect to Houston, but the biggest challenge the Illini will face is probably the potential Sweet 16 matchup against Cade Cunningham and Oklahoma State.

When both Cockburn and Dosunmu are clicking for the Illini, magic happens on the court. It’s not every day you get to see two top NBA prospects playing on the same court together, and it’s even more striking when one of them is seven feet tall.

It’s kind of like if Collin Sexton and Deandre Ayton were on the same team in college. Super fun for us to watch — super terrifying for opponents.

Illinois should breeze through it’s first two matchups (no disrespect to future YMCA legend Cam Krutwig) to find themselves with a Sweet 16 matchup against Oklahoma State, and future number one draft pick Cade Cunningham.

Now I have burned myself literally like seven times this season betting against Oklahoma State, but fuck it I’m doing it again.

Oklahoma State is good — Cade Cunningham is great — they can beat anybody on any given day. However, that day won’t come against Illinois. The Sooners just straight up don’t have the height, their tallest player that plays is 6’9”, and other than Cunningham Oklahoma doesn’t have a ton of other true scoring threats.

I’ll take Illinois by at least five in this game, but we’ll see how things shake out.

After Oklahoma State, Illinois would most likely face Houston or West Virginia, who for similar reasons to the Sooners just can’t match up with Illinois.

Houston has played basically nobody all season, and I highly doubt they could beat an Illinois team who has made it that far in the tournament already. West Virginia is kind of like Wisconsin this season but a little better, and have already lost to Oklahoma State twice this year, so I doubt they’d beat the Illini.

So there it is. Bet these picks and start counting your money now loyal readers. You’re welcome.