President Donald Trump tweeted Wednesday morning that he had a “productive meeting” with Big Ten Commissioner Kevin Warren discussing plans for a 2020 Big Ten football season this fall. Trump added that a potential plan is “on the one yard line,” though there is no indication from the Big Ten that an official plan will be announced soon. 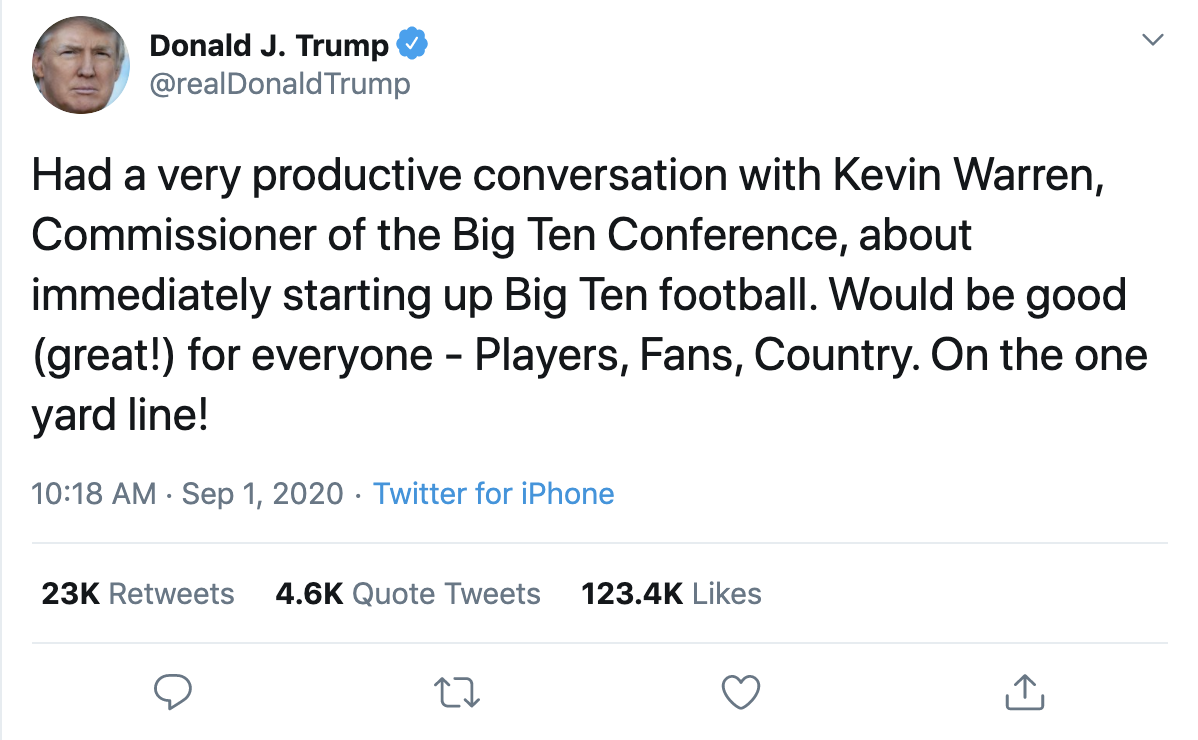 The Big Ten released an official statement a few hours later confirming the meeting between Trump and Warren, and added that the school presidents are “exhausting every resource to help student-athletes get back to playing the sports they love, at the appropriate time, in the safest and healthiest way possible.”

President Trump’s involvement in the conference’s pandemic preparations is the latest turn in a wild couple weeks for Big Ten football. The season was originally postponed in early August after school presidents voted in favor of not playing out the revised conference-only schedule.

On Monday, the Big Ten revealed officially that the decision to postpone passed by an 11-3 margin, with just Ohio State, Iowa and Nebraska voting to play the season. Nine Nebraska football players have decided to take legal action against the Big Ten, stating in their lawsuit that the cancellation is “invalid” due to the conference’s “vague reasoning and no explanation.”

The Pac-12 Conference is the only other Power Five conference to cancel their fall season so far, but no official statement or tweet from either the Pac-12 or Trump has indicated that the two sides have had any meetings to resume.

Trump’s involvement with the Big Ten — but not the Pac-12 — has led to widespread speculation that the Trump campaign is using a Big Ten restart to increase the President’s popularity in midwest states ahead of the election.

If Big Ten presidents do come together and reverse course on the season’s fate, the next question becomes: when do the games begin? Rumors surfaced Wednesday about a season beginning as soon as Oct. 10 “if [the] conference can pass updated safety measures and procedures”, according to Dan Patrick of The Dan Patrick Show.

An Oct. 10 restart would give teams just over five weeks to secure a vote in favor of playing, establish protocols to ensure that the players are safe and isolated and resume football activities.

While these complications remain to be resolved, it’s worth noting that many Big Ten players have expressed a desire to play as soon as possible. Last Saturday morning before the FCS kickoff, Wisconsin cornerback Faion Hicks tweeted out his displeasure over the differing conference policies this fall.

While the Big Ten and Pac-12 sit idle for the time being, the ACC and Big 12 are scheduled to begin conference games as soon as Sept. 11. The SEC will kick off their conference-only schedule two weeks later with their conference opener on Sept. 26.

All eyes will be on those 39 teams as they combat the COVID-19 virus among rosters of about 120 players per team. A successful couple of weeks without an outbreak could persuade Big Ten presidents into action; on the contrary, one or multiple outbreaks would likely persuade the Big Ten to keep to their original plan of no fall or winter football.

Subscribe to The Daily Cardinal Newsletter
Comments powered by Disqus