On April 4, hundreds of leading scientists published the third and final part of the latest authoritative assessment on the Earth’s changing climate. Taken together, the three parts of the latest Intergovernmental Panel on Climate Change (IPCC) report paint an ominous picture of the accelerating impacts of global heating on humans and nature.

At the same time, the scientists highlight the growing ability of available climate solutions, including clean energy technologies, like wind and solar power, to mitigate future warming and preserve a habitable planet. In other words, the severity of the problem and our capacity to address it are rising in parallel.

The IPCC typically issues comprehensive assessment reports every six to seven years. The most recent is its sixth since the organization was established by the United Nations in 1988. The climate and social scientists involved volunteer their time and expertise to synthesize the best available evidence into one report.

The first part of the latest report, released in August 2021, dealt with the latest science behind our changing climate, while the second, published in February 2022, discussed observed impacts of the warming that has already occurred since 1850 and ways we can adapt to it. The newly released third part explores how we can minimize – or mitigate – future climate change.

Alarm is a prerequisite for hope.

Previous IPCC reports established a clear warming trend of Earth’s climate system and stated that human influence was clearly a main driver of that trend. Last year's report, however, was the first time that the IPCC had published such a stark assessment of its certainty regarding the human origins of climate change.

One of the authors of the report, Indian climate scientist Govindasamy Bala, added, “This is the first time the IPCC has come out with an unambiguous statement that human activities are causing climate change.”

The report estimated that humans have warmed global temperatures by approximately 1.07 degrees Celsius since 1850, moving closer to surpassing the target in the 2015 Paris Agreement to limit global warming to 1.5 degrees Celsius above pre-industrial levels.

“We are at imminent risk of hitting 1.5 degrees in the near term,” said United Nations Secretary General Antonio Guterres in the wake of the report’s release. “The only way to prevent exceeding this threshold is by urgently stepping up our efforts, and pursuing the most ambitious path.”

In terms of bottom-line impacts, evidence in the report points to rapidly accelerating seal-level rise upon the world’s coastlines. While average global sea level rose by less than two millimeters per year between 1991 and 2006, that rate increased to 3.7 millimeters per year between 2006 and 2018, according to the IPCC — faster than at any time in “at least the last 3,000 years.” The report adds that some changes, especially to sea level and ice sheets, are “irreversible for centuries to millennia.”

With higher sea levels, coastal communities will be at greater risk of flooding during increasingly frequent extreme weather events. Additionally, properties at or near the current sea level may soon face frequent inundation and potential property damage, even without heavy precipitation. Scientists predict the impacts of future floods will fall disproportionately on people of color.

The frequency and intensity of extreme weather events, including heatwaves, heavy precipitation events and droughts have all increased and are projected to continue to rise across the globe. An extreme heatwave that would have occurred once every 50 years in 1900 is now expected to occur about once every 10 years. In a world that has warmed 1.5 degrees Celsius, such a heatwave would be expected nearly once every five years.

The report reminds readers that if humanity can reduce greenhouse gas emissions drastically and rapidly, it will lead within years to “discernible” positive effects on air quality, and within two decades to “rapid and sustained effects to limit human-caused climate change.” This means quickly leaving fossil fuels behind.

In short, the best available science is telling us that we have already inflicted serious damage on the climate. Even so, it emphasizes that deep and sustained greenhouse gas reductions can limit future warming and lessen its impacts.

The graphic below illustrates how IPCC scientists expect climate impacts to play out across a range of human and natural systems with varying degrees of global warming. The two scenarios represented by blue lines in graph (a) correspond to scenarios in which humans drastically and rapidly reduce greenhouse gas emissions and limit global warming to less than 2 degrees Celsius above pre-industrial levels. In graph (b), the scientists assess how “reasons for concern” escalate alongside warming. Graphs (c) and (d) correspond to predicted damages to various ecosystems at different levels of warming.

Even at 1.5 degrees of warming, severe impacts to biodiversity, forests, coral reefs and salt marshes will occur. With each additional increment of warming, future risks increase for all ecosystems, including those that are cornerstones of life in Wisconsin. 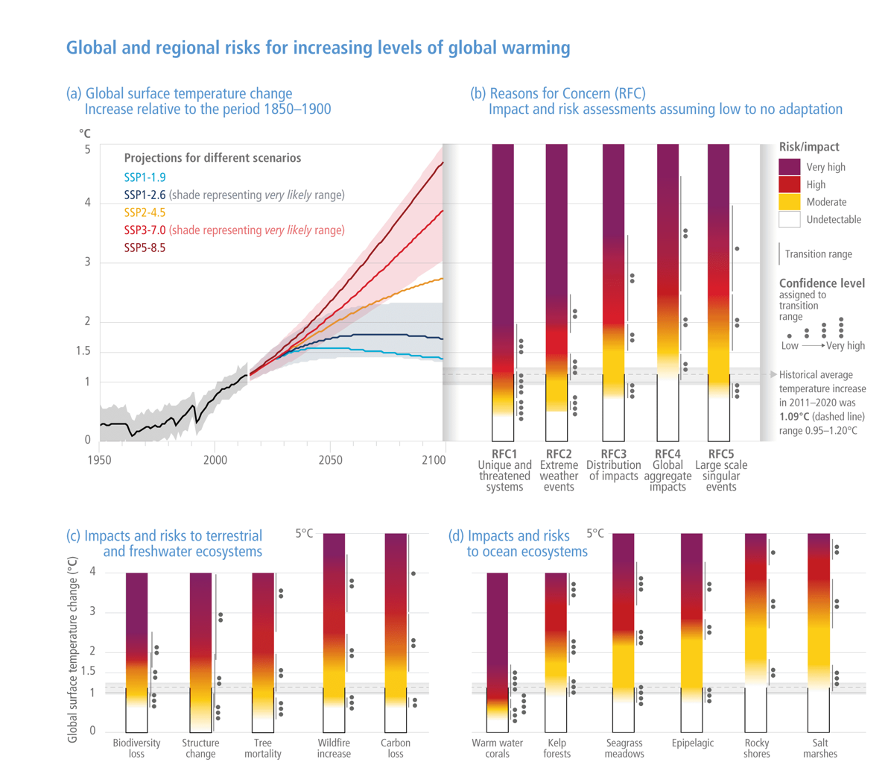 The University of Wisconsin-Madison is home to a co-author of the report’s third part, on actions humanity can take to mitigate climate change. Gregory Nemet is a professor at the La Follette School of Public Affairs whose research focuses on energy policy. He is the author of the book How Solar Became Cheap: A Model for Low-Carbon Innovation.

Nemet said IPCC scientists agree on the critical threshold of reaching net zero greenhouse gas emissions by 2050. Unfortunately, he noted, emissions over the previous decade remained on an upward trajectory, reducing the time we have left to make transformational change.

The promising news is that the prices of emissions-free renewable energy technologies have dropped drastically since the publication of the previous IPCC assessment. In the last decade, for instance, wind power has become 50% cheaper, while the cost of solar power has gone down by an astonishing 85%.

“What’s really happened in the last 10 years is being able to manufacture those solar modules much less expensively,” Nemet said. “We’ve got the tools, and we’re going in the right direction. We just need widespread adoption.”

Globally, wind and solar power provided over 10% of all electricity for the first time in 2021, according to the energy analysis firm Ember. Now, fossil fuels like coal and gas that still power much of our energy system must be phased out as fast as possible. 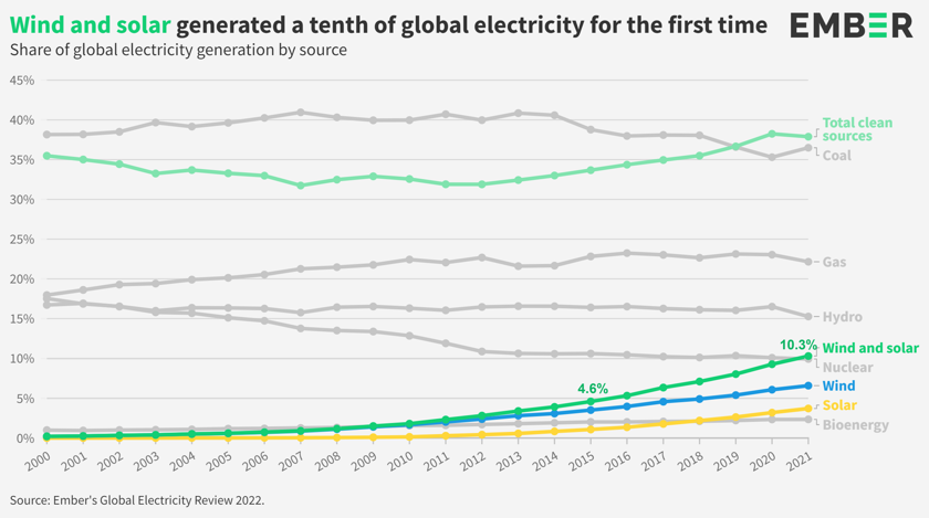 Nemet added that batteries for electric vehicles (EVs) have also gotten 85% cheaper in recent years, which should push government officials to speed up the transition to EVs as Americas’ primary form of transport. The ability for EV owners to be comfortable taking longer trips, according to Nemet, will be crucial.

“The next area that’s crucial for policy is helping charging infrastructure get built in the U.S.,” he said.

This chart from part III of the IPCC report shows the dramatic recent cost reductions in renewable technologies, alongside accelerating global adoption rates. (Note: photovoltaics – PV – is another term for solar power). 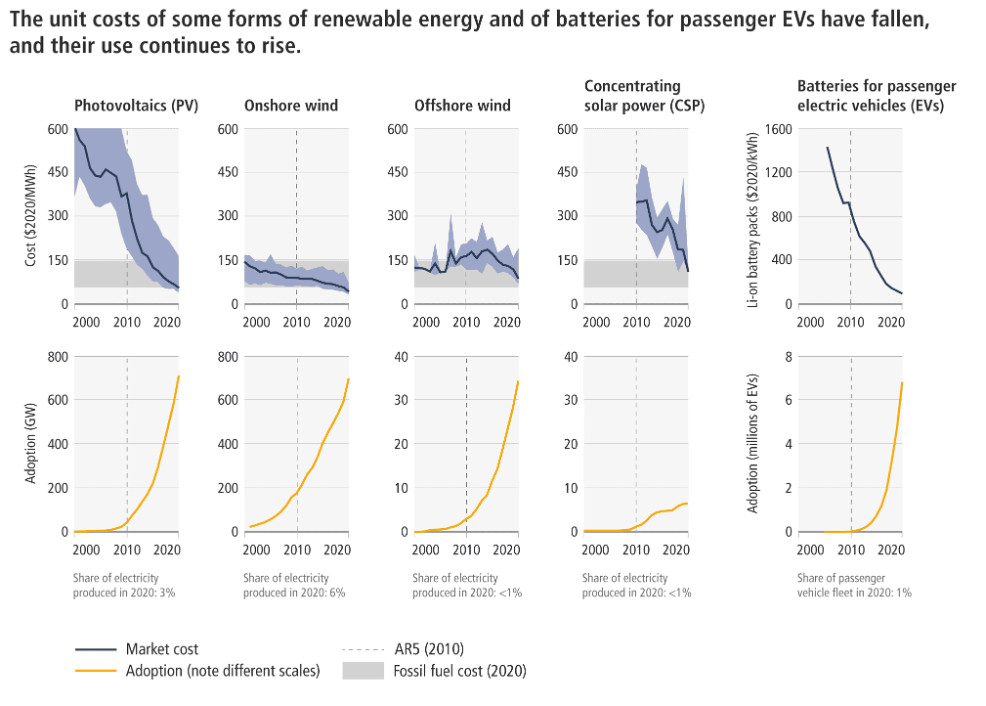 At this point, according to Nemet, the fossil fuel industry should not play a role in climate-change governance. “In terms of policy making, they don’t have the credibility to play the role of an honest broker. They don’t deserve a seat at the table.”

However, fossil fuel companies employ thousands of energy experts who “know how to build things and distribute them,” Nemet said. Therefore, their future role in addressing climate change may be limited to hard-to-decarbonize sectors like aviation and shipping.

But the continued burning of fossil fuels risks pushing humanity beyond tipping points that will make the world a less livable place for everyone. As Guterres tweeted after the IPCC report’s release, “Climate activists are sometimes depicted as dangerous radicals. But the truly dangerous radicals are the countries that are increasing the production of fossil fuels. Investing in new fossil fuels infrastructure is moral and economic madness.”

Nemet offered three concrete steps everybody can take to help move us forward in the transition to a more sustainable planet. First, “adopt practices and behaviors that fit with a low-carbon lifestyle,” like flying less and biking more. These behaviors can catch on in people’s social circles.

Second, Nemet said, “get involved in the political process, from voting on climate policy to activism and working with legislators.” As the inventor Saul Griffith wrote in Electrify, “We must demand that politicians drive this transformation faster than free-market forces alone are capable of doing.”

Most importantly, Nemet advised, “The biggest leverage is to use your talents toward the problem. Figure out what you have to offer.” He added, “The problem is so big that the solutions need to be comprehensive. Art and song matter. Engineering matters. Entrepreneurship matters.”

'The Cosmic Perspective’ and learning with UW-Madison astronomers