The Wisconsin Idea is widely considered to be a testament to the importance of public service. Its spirit is widely cited in bettering the lives of Wisconsinites in areas as diverse as the formulation of labor law to best practices in milking dairy cows.

But the university’s reach is not just civic—it is financial as well. In fact, the Wisconsin Idea even began in part as a way to ensure that the knowledge from state universities would be a way to for citizens to exercise power in their economy. UW-Madison is credited with generating an estimated $15 billion in statewide economic activity in 2015 and many of its programs are considered vital in producing the next generation of the state’s doctors, and scientists.

The economic impact of the university is so great that businesses in Madison and beyond find themselves on the frontlines, lobbying lawmakers against corroding a powerful engine that drives a range of industries across the state.

Some say that this economic power, and the subsequent agency the university grants Wisconsinites to exert over their economy, has been diminished by cuts to state funding for the UW System. This has heightened the stakes surrounding the current budget biennium, and business and trade organizations are trying to make their voice heard.

Fourteen businesses or economic and trade groups have registered as lobbyists for UW System funding in the 2017-1’9 biennium budget, according to the Wisconsin Ethics Commission’s database. These range from private groups such as the Marshfield Clinic to private groups such as the Metropolitan Milwaukee Chamber of Commerce and the Dairy Business Association, which said that it is pushing for more funding for the College of Agriculture and Life Sciences.

But even organizations are engaging lawmakers about funding, just in less formal ways. Paul Jadin, president of the Madison Region Economic Partnership, said that his organization’s board of directors took a rare step and singled out funding for the UW as an issue on which they would lobby policymakers.

Jadin noted that his group’s mission is to promote economic development in the Madison area but that the importance of the university required further action.

“The issue for us is making sure [UW-Madison] remains an extraordinary asset for years to come,” Jardin said. “We want to make sure that going forward we will have the ability to say that this is something unique to the Madison region and the state of Wisconsin and that we have that asset that very few regions in the country can claim.”

Ryan Natzke, the chief external affairs officer and head lobbyist for Marshfield Clinic Health System, noted that UW-Madison is “vital” to the needs of upstate businesses as well.

“One example is the Wisconsin Academy for Rural Medicine program which specifically focuses on meeting the workforce needs of rural health care providers and is a critical issue that our state is facing,” Natzke said. “The impact of UW-Madison is truly statewide.”

That impact is equally beneficial for students who are involved in partnerships between the university and the business. Kieran McCabe, a graduate student in UW-Madison’s College of Engineering, described the project he’s been doing for the company BRP, which produces vehicles and has an office in Sturtevant, Wisconsin.

Since September 2015, McCabe has been at work testing an Evinrude two-stroke outboard motor to ensure its new of fuel efficiency works in real time. BRP engineers modeled the design digitally, McCabe explained, and it is his job to validate it.

“If you want to get into the industry and actually work for a company rather than a national lab, this experience is probably better,” he said. “My project specifically is more applicable to the kind of timelines and interests of a company that makes a product … it gives you a pretty good idea of how they work through a problem and the kind of things they’re looking at.”

Many engineering students are given the opportunity to work on projects for a specific business or consortium of businesses. McCabe said he is in constant contact with engineers at BRP, who hear updates on his work and help him through any problems he might have.

And although working on big engines like this specific problem involves isn’t the exact path he wants to take upon graduating, he said the skills he’s learned by partnering with BRP on this project will transfer to the workforce in a valuable way.

“You know how to do the calculations to get what you want, but those always have some assumptions in there, and it’s kind of abstract,” McCabe said. “But this, being able to actually do it myself, most of the time, put it all together, you see where the equations fall short and where you need to have some practical knowledge how things actually work.”

Of the billions of dollars surged into the state’s economy as a result of the university’s many partnerships a significant chunk stems from partnerships with big companies like Johnson Controls and GE Healthcare. Charles Hoslet, vice chancellor for university relations at UW-Madison, described how the companies not only hire students but also lend a hand in research.

“There’s a great partnership between us and Johnson Controls and UW-Milwaukee, working in battery technology,” Hoslet said. “There's a faculty member here, they've got a lab at UW-Milwaukee, and so it's a great example of not just our university partnering with the company, but partnering with another institution as well.”

These partnerships, which are often contracted to span several years, provide millions of dollars of support to the university in exchange for students-turned-employees as well as the groundbreaking research involved in many of the contracts.

But even small-scale businesses churn out money for the state, like startups whose leaders found their niche in that staunch research base of UW-Madison. A 2015 economic impact report on the university found that these startups—of which there were 311 at the time—contributed more than $2 billion to the state’s economy.

mentioned companies like FluGen, developed first in a UW-Madison lab working on a better vaccine against the flu virus, and Exact Sciences, a molecular diagnostics company now headquartered in University Research Park.

With the roughly $1 billion that research endeavors draw into the state, it’s no surprise that businesses around Wisconsin—and especially those in direct partnership with UW-Madison—were concerned to see the university fall out of its ranking as one of the top five research institutions in the nation last fall.

“Those who do work more closely with us or understand better about how research rankings are composed have realized that a drop from five to six represents that we're not, for the first time in forty-some years, in that top five,” Hoslet said. “I think people worried less about it as a single event as much as is this a trend that's starting that will build on itself over time."

So how does the university get a return on its investment in the economy when it comes time for Gov. Scott Walker’s biennial budget? It’s all about asking for advocacy from the business community, explained.

In addition to chancellors at many System schools including UW-Madison making rounds throughout the state to talk to local business leaders, university officials have reached out to the MadRep, the Greater Madison Chamber of Commerce and Downtown Madison, Inc., the last of which sent a formal resolution to the governor’s office asking the state to more fully fund the university system.

And beyond those larger business conglomerates, added he’s heard from individual business leaders who have approached their legislators about the matter.

“"They've been quite helpful in saying, 'Yeah, I understand it, and when I run into Rep. X or Sen. Y, this is on my list,’” Hoslet said.

The push from Wisconsin’s business community for adequate funding for the university has been a strong one this year, described, leading to what he called a “good” budget on the financial side for the next biennium. This advocacy is also on an uptick from where it was before the state’s last budget, which dealt a $250 million cut to the UW System.

Hoslet said because not many of the system’s budgets have been “horrible, terrible or critical at any one time” in the when it came time to ask economic partners to lobby for the universities in the 2015-’17 budget, those partners didn’t quite expect such a slash in funding.

“Then we came up with the $250 million cut,” he said. “I think many of them said, ‘Holy cow, we’ve got to do a better job of letting our legislators know why this is important.’”

Jadin said MadRep wrote letters to state legislators and to the governor expressing support for funding the university. In addition, they coordinated with local chambers of commerce to engage in more robust lobbying efforts.

“You have to show some degree of unification,” he said. “Chambers of commerce and economic development organizations across the state have to show they’re on the same page and they have to show that their opinion matters to voters and therefore it should matter to the people who are accountable to the voters.”

“In drawing that connection between funding for the UW and what’s good for business, it isn’t always obvious to every elected official,” Jadin added, noting that his group has to navigate the laundry list of complex budget issues to make the case for supporting public higher education.

But even in the face of the cuts that have been the system, said he and other university leaders are working hard to keep UW-Madison strong and keep the spirit of the Wisconsin Idea alive.

He also explained that most of the challenges have come only in the last few years, meaning it will be easier for the campus community and those who support it, like businesses throughout the state, to find opportunities for improvement. 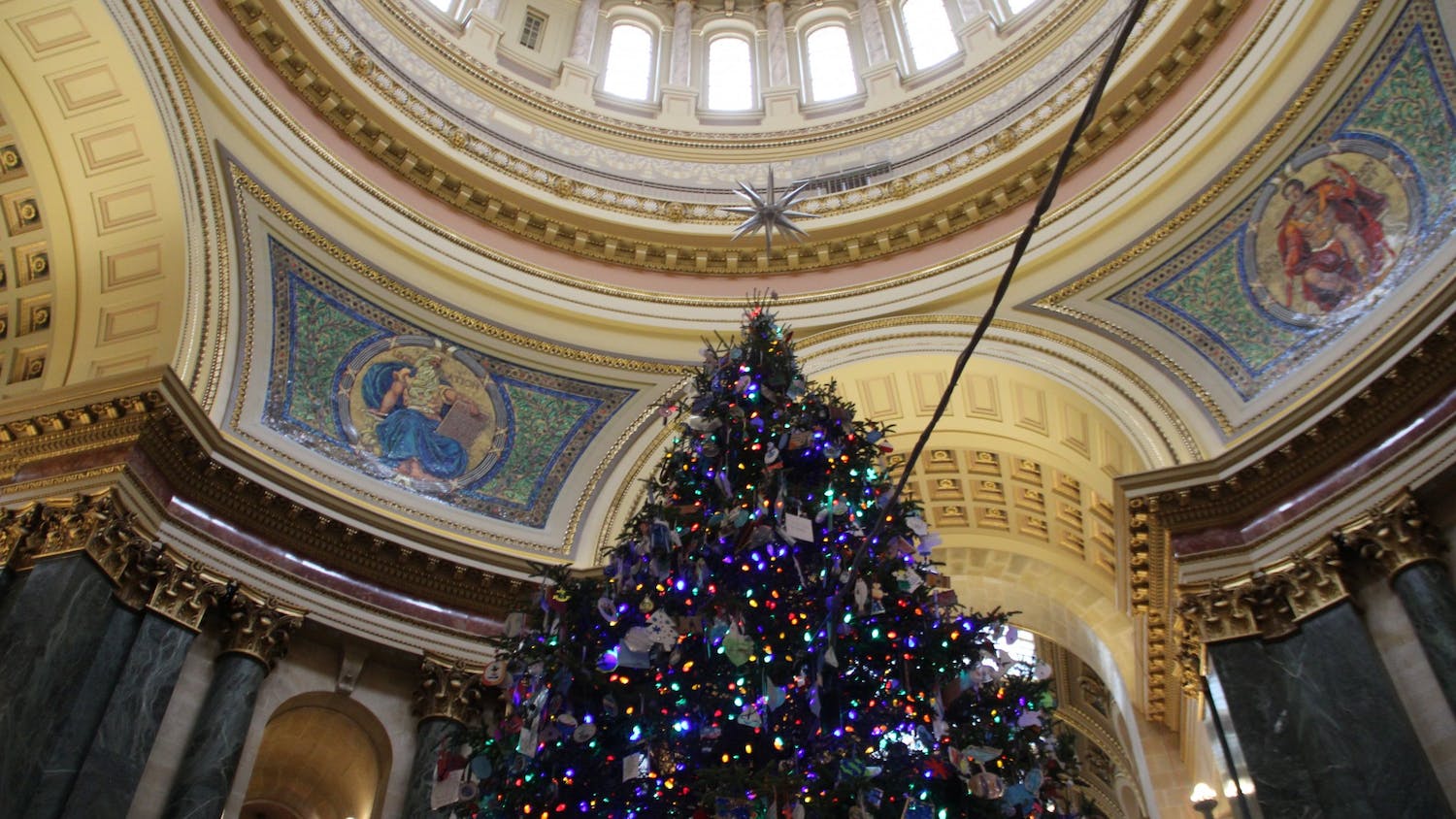